The Japanese financial conglomerate SBI Holdings announced that they are going to be using XRP in order to make international transfers more efficient. According to Nikkei.com, the company is going to be using XRP as a way to perform cross-border currency swaps. Despite this good news for XRP, the crypto analyst and chartist Peter Brandt considers that the movement experienced by this virtual currency was just a “dead cat bounce.”

XRP Surges But It Could be a “Dead Cat Bounce”

The new test will allow SBI to understand whether it is possible to use XRP to trade fiat currencies in different markets. This could reduce transaction times across borders and also reduce the fees involved in all the transfers. SBI would have to analyse whether volatility in the crypto market would affect or not the new services they want to offer using XRP.

Basically, the XRP virtual currency would work as a bridge asset between two fiat currencies with low liquidity. This is one of the main solutions provided by Ripple and the new implementation they want to push around the world.

The fourth-largest cryptocurrency in the market, XRP, is was able to register a 10% increase when the digital currency moved from $0.239 to $0.265 in just a few hours. This marked a bottom for the XRP/BTC trading pair.

XRP has been in a bear market against Bitcoin since December 2018. Nowadays, XRP remained stable when compared to the USD in the last year. The XRP virtual currency was traded between $0.15 and $0.47 being most of the time close to $0.26.

Nevertheless, the recent spike in the price of XRP could be just a “dead cat bounce,” as explained by Peter Brandt. On Twitter, he stated that investors shouldn’t be long te weakest asset.

About it, Mr. Brandt said:

“Dead cat bounce after 32 straight red days. The best trading practice is to be long the strongest member of a category when long, short the weakest when short. Don’t be long the weakest hoping upon hope to catch up.” 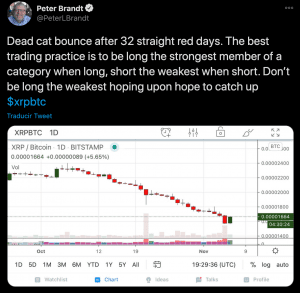 Several traders purchased XRP expecting the virtual currency to move higher in the future and catch-up with Bitcoin. Nevertheless, this may not happen at all, according to Peter Brandt. Some users and investors consider that XRP is an old project with a large supply that may not work today for speculators.

Why Bitcoin Price Could Start Strong Increase Above $50K