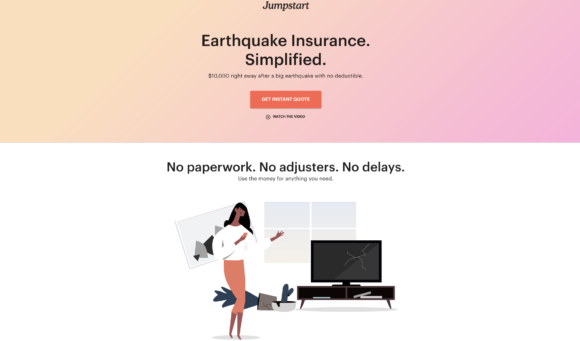 Jumpstart Insurance Solutions Inc. is on the move in the earthquake-prone West – and the company is now working with insurance agents.

Jumpstart, a licensed surplus lines insurance broker using Lloyd’s capacity, began offering earthquake insurance in California a little over two years ago in the form of a parametric product, with payments linked to a formula and based on U.S. Geological Survey earthquake measurements.

Kate Stillwell, founder and CEO of California-based Jumpstart, announced this week the firm is now offering their products in Washington and Oregon.

Jumpstart began operating in the two states in early December, but held off until now to let the public know. Since announcing the availability of the products on Tuesday, several new customers have signed on.

“Now we have a few dozen policies,” Stillwell said of the results from three days of mostly word-of-mouth buzz in Oregon and Washington.

Customers can sign-up online for the product through Jumpstart’s website, and policies will be underwritten and administered by AmWINS Group Inc. Policyholders pay a monthly amount and are paid a set amount automatically if there is an earthquake in their area.

The website touts what the business says is a simple process, “Earthquake Insurance. Simplified.” Several keywords on the site’s homepage drive home a similar message: “No paperwork. No adjusters. No delays.”

After an earthquake of a pre-specified intensity as measured by the USGS, Jumpstart automatically sends a text message to each customer in the impacted region. Customers must respond to the text to confirm loss or damage, and a pre-defined payment amount will be automatically authorized for direct deposit into the customer bank accounts.

Premiums are risk-based and are a reflection of the underlying probability of reaching the triggering shaking intensity at a given location. Premiums vary by ZIP code.

Jumpstart’s product is available to renters, homeowners and businesses.

“I’d say about 40% of our customers are renters,” Stillwell said.

Roughly half are homeowners, and the rest are businesses, according to her.

The product is often purchased by those who are moving or have recently moved, or are otherwise buying other insurance, she said.

“Most of our homeowners are really early in their equity position, Stillwell said.

Policies at first were currently only available through the Jumpstart website, leaving agents out of the loop at the start.

Since then Jumpstart has begun to work with a handful of agents.

They currently work with Acrisure and their partners.

“We have a mechanism of working with agents,” Stillwell said. “We have an appointment process and agents can absolutely sell Jumpstart to their clients.”

Stillwell is a former structural engineer and earthquake risk consultant. She was an earthquake products manager in 2010 for EQECAT Inc., a catastrophe risk modeling firm acquired by California-based data and analytics firm Corelogic in late 2013.

Jumpstart’s website promises customers “fast, simple payments” in lieu of the traditional claims handling process with the parametric product, which does not indemnify the pure loss but makes a payment upon the occurrence of a triggering event.

Stillwell said the affordability of the product is part of the rationale that drives customers into buying it, but that’s not their biggest motivation.

“It takes out the negotiation with the insurance company when a claim is made,” she said.

She said she’s keeping the Jumpstart team lean by keeping as many of the functions as fully automated as possible. She currently only has eight people working under her.

That hasn’t stopped their expansion.

“Will be launching via a local broker in New Zealand in a month,” she said.