Breaking News
BLOCKCHAIN – THE QUIET ACHIEVER
Learn how CoinJar is improving liquidity to bring you better prices
Hackers Donate Bitcoin From Ransomware Attacks to Charities
Bitcoin Edges Towards $12,000 As The Market Prepares For A Massive Options Expiry
21 Oct, 2020
Skip to content

Bitcoin and blockchain technology have the chance to revolutionize our financial systems by creating a new “trust layer” which isn’t controlled by politicians or banks. They also enable people to send money around the globe in seconds and at a fraction of the cost as today’s methods.

Bitcoin has been around for more than 10 years and now has reached a more mature global stage with regulated exchanges, over hundreds of millions traded every month, and highly traded derivatives such as futures and options.

With such a ground-breaking and mature technology, many experts in the field believe cryptocurrencies can grow exponentially more. This article reviews the latest price predictions for some of the most popular cryptocurrencies including Bitcoin, Ethereum, Ripple, and Chainlink.

Of all crypto price predictions, Bitcoin is the number one asset cryptocurrency investors pay attention to. As the leading cryptocurrency on the market, many would state it’s the most important of the cryptos to invest in.

Even bolder, however, is the report’s prediction that Bitcoin will hit $341,000 by 2025. “We believe that bitcoin is still at the very start of its adoption curve. The price of $7,200 at the end of 2019 suggests that bitcoin has penetrated less than 0.44% of its total addressable markets. If this penetration manages to reach 10%, its non-discounted utility price should reach nearly $400,000.” – Crypto Research Report, June 2020

Gavin Smith (All-time highs in 2021)
While the previous predictions have all been positive, one expert claims Bitcoin will fall before it rises again. CEO of the Panxora exchange and digital ventures firm, Gavin Smith, believes the price will crash to $7,000 by year’s end. From there, however, the asset should hit an all-time high come 2021, Smith said to Forbes.
“Our view is that we still believe the markets are pulled on the one hand by the inflation hedge story driving bitcoin higher while at the same time the global economy is suffering a massive demand shock with the potential to drive bitcoin lower.” – Gavin Smith

Anthony Pompliano ($100,000 by the end of 2021)
One of the most prominent names in the space, Morgan Creek Digital co-founder Anthony Pompliano predicts Bitcoin may hit $100,000 by the end of 2021, with a $400,000 to $450,000 prediction in the long-term. He believes this growth will come from Wall Street investors, largely because Bitcoin has been around for over 10 years now.

PlanB, popular economist ($288,000 by 2024)
Popular cryptocurrency analyst PlanB predicts Bitcoin will hit $288,000 by 2024. While this is a bold claim, his belief is based on the stock-to-flow model. PlanB believes scarcity drives value, applying the formula used on traditional precious metals that takes the current count of Bitcoin available on the market and models it against the number of assets entering the market. 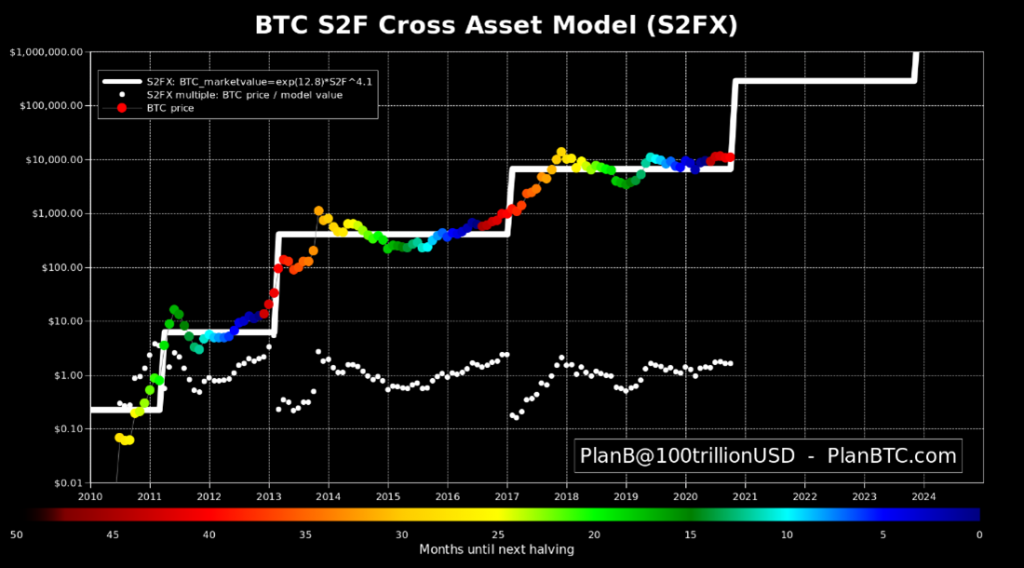 Bloomberg ($100,000 by 2025)
A detailed analysis provided by Bloomberg Intelligence compared Bitcoin to a digital version of gold. They cited recent large investments from investors such as Microstrategy. They claim Bitcoin’s price could rise to $100k based on increased adoption.

Winklevoss Twins ($500,000 by 2040)
The multi-millionaire entrepreneurs who founded the Gemini exchange predict Bitcoin will hit $500,000 within the next two decades. They reason that Bitcoin is the only long-term protection against the inevitable inflation of the United States dollar, and Bitcoin tends to add zeros and double every few years.

“Bitcoin has already made significant ground on gold — going from whitepaper to over $200 billion in market capitalization in under a decade. Today, the market capitalization of above-ground gold is a conservative $9 trillion. If we are right about using a gold framework to value bitcoin, and bitcoin continues on this path, then the bull case scenario for bitcoin is that it is undervalued by a multiple of 45.” – Tyler Winklevoss

Max Keiser ($10,000 eventually)
Bitcoin fanatic and Keiser Report host Max Keiser also predicts a six-figure Bitcoin price without a timeline. When Bitcoin broke $11,000 in July, Keiser tweeted that “$28,000 is in play.” He then claims the asset price will fall again before reaching $100,000. This could be in months, years, or even decades – but Keiser is so confident he even calls out Peter Schiff in the same tweet.

Yassine Elmandjra (Net cap $1-5 trillion within 10 years)
Ark Investment Management’s analyst Yassine Elmandjra is one of the most optimistic Bitcoin bulls. He believes that investors should pay close attention to Bitcoin as a major asset class. Yassine predicts the network capitalization of Bitcoin to become between 1 to 5 trillion dollars within 5 to 10 years.

The top Ethereum price predictions from enthusiasts and analysts in the space. If you want to buy Ethereum, consider these opinions before doing so.

Simon Dedic ($9,000)
Simon Dedic is the founder of the Blockfyre digital asset analysis group. He predicted in June that Ethereum would reach $9,000 after the return of the altcoin bull run. He correlates this to Bitcoin hitting the $150,000 price point one day. As for the short term, Dedic believes we’ll see an $800 Ethereum price.

Crypto Michaël ($415 by end of 2020)
Industry-favorite trader Crypto Michaël believes Ethereum can hit $415 by year’s end, though only if the asset can break through the mid $300 price range. Otherwise, he thinks the Ethereum price may crash to around $280 come Q4 2020.

It’s important to note that Ripple is actually the company behind the Ripple blockchain. The chain’s asset is called XRP.

TradingBeasts (Up to $0.48 in 2023)
TradingBeasts, a platform utilizing an algorithm that “works with historical price data” alongside “linear and polynomial regressions” to predict prices accurately, doesn’t predict as high of a peak as the other platforms. TradingBeasts predicts XRP will range from $0.29 to $0.48 in 2023.

Chainlink price predictions from enthusiasts and analysts in the space.

Digital Coin Price ($40 within a few years)
Digital Coin Price believes Chainlink will end 2020 at a meager $8.45 before jumping up to $22.07 in just one month. It then claims the asset will range between $5 and $27 throughout the year before hitting the $30’s and even the $40’s over the following few years.

Learn how CoinJar is improving liquidity to bring you better prices